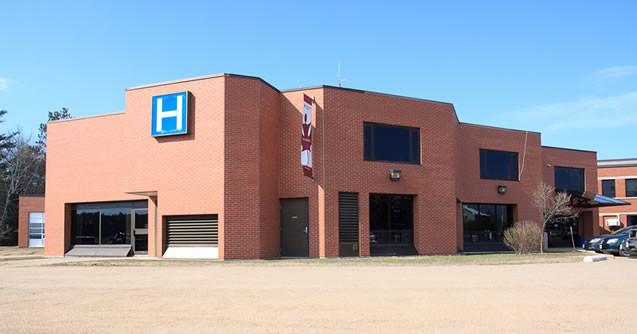 It was the foresight, determination and vision of the late Rt. Rev. Peter Biernacki, Parish Priest of St. Hedwig’s that were significant factors in the planning and the erection of this sorely-needed building. A humanitarian, with the needs of the people always at heard, Monsignor was strongly aware of the need of a hospital facilities and care for an ever-growing Community. The nearest hospitals were at Pembroke, Renfrew and Bancroft, some fifty to sixty miles away. “Lives could be lost,” he said, “and emergency care not available.”

In the early 1940’s, he revealed his dream to his parishioners, who responded with alacrity and full co-operation. in 1946, the Ladies Auxiliary was formed to lead the parish in a campaign for funds. It persevered resolutely throughout the years and raised some $38,000 for the institution. This was far from being sufficient to launch the undertaking. Monsignor, therefore, broadened his field of canvass to include neighbouring Parishes, Township Councils, Heads of Corporate Bodies, individuals and interested Departments of Governments. He received many pledges of assistance and encouragement.

But fate has its own designs. Monsignor Biernacki was denied the privilege of seeing the culmination of his dedication and work. Ill health and his death in December 1958 cut short his endeavors.

Fortunately, Mr. Henry J. Chapeski, a life long, versatile and dedicated parishioner, as well as a public-spirited citizen with a deep knowledge and experience in business and municipal affairs brought Monsignor’s dream into reality. Tenacity, “know how”, and the co-operation of several individuals gave to the district one of the finest and most modern, small rural hospitals in the Province.

The land for the hospital site was purchased, in 1947. Planning stages were initiated as early as 1948 and later formulated by Monsignor Biernacki and Mr. H.J. Chapeski with the continual support of the entire Community. The Charter was applied for in 1949, and was received on May 12, 1952. The official sod turning ceremony took place in August 1959 and construction was duly begun. The Cornerstone was laid at the new St Francis Memorial Hospital site on Wednesday, November 4, 1959. The ceremony was under the direction of the Hon. Matthew B. Dymond, Minister of Health assisted by Hon. James A. Maloney and dedicated to the memory of Rt. Rev. Peter B. Biernacki. The $445,000 hospital took approximately 10 months to erect. Construction was done by M. Sullivan & Sons of Arnprior. Architect for the building was Morris Woolfson of Ottawa. It is a 34-bed hospital approximately 300’ by 44’ in size and has red brick decor exterior.

The first baby born at the hospital was Andrea Chapeski, daughter of Dr. & Mrs. A.H. Chapeski and granddaughter of Mr. & Mrs. Henry Chapeski.

On Tuesday, October 25, 1960, the hospital was officially opened by the Hon. Leslie Frost, Premier of Ontario assisted by the grand niece of Monsignor Peter B. Biernacki, 7 year old Beverly Flynn. The Chairman for the occasion was Mr. Paul Yakabuski, Reeve of the Village of Barry’s Bay who welcomed the honoured guests, the Hon. James A. Maloney, Minister of Mines and M.L.A for Renfrew South, Mr. Murray Daly, Reeve of Sherwood, Jones & Burns and Warden of Renfrew County, Mr. Maurice Hamilton, M.L.A. for Renfrew North and Dr. J.B. Neilson, who brought greetings from the Ontario Hospital Services Commission. All speakers commended the organizations and individuals in the Community who had given so unstintingly of their time and efforts, and their monetary assistance. Also present for the occasion was His Excellency Most Rev. W.J. Smith, Bishop of Pembroke, who blessed the hospital and offered Mass in the Hospital Chapel. Rev. A.J. Maika, Parish Priest of St. Hedwig’s and clergy from the neighbouring parishes also were in attendance. Some 1500 citizens of the area were on hand to see the culmination of years of sacrifice and hard work. Several members of the Sisters of St. Joseph, whose Motherhouse is in Pembroke were also present. It was to this congregation of Sisters to whom the Administration of the hospital was designated. Sr. Mary Emma was named directress and with six other sisters was placed in complete charge of the Administration and Nursing and Technical operations of the new Hospital.

Initial Staff and Board

The initial staff of Nurses and Employees numbered 35. The Medical Staff was comprised of Dr. A.H. Chapeski, Dr. P. Dooley, Dr. F.W. Eggert, and they were assisted by Dr. P. Wallbridge on the Courtesy Staff.

Throughout the years the staff of St. Francis Memorial Hospital has continued to server the Village of Barry’s Bay and all adjoining Communities in a professional and dedicated manner.

In November 1966, St. Francis Memorial Hospital received its first Accreditation survey and has since been successful in attaining this status every three years.

In January 1971, the Barry’s Bay Ambulance Service came into existence. Its base is situated at the hospital. At this time, there were approximately 200 calls with 32,200 kilometres traveled. In March 1983, there were approximately 750 calls with a distance of 83,000 kilometres traveled. Previous to 1971, Ambulance Services to the Community were provided by Mr. William Goulet.

When the hospital was constructed, provision was included for expansion, should the need arise. In 1985, the expansion program brought the bed compliment to 17 beds for chronic care and 24 active care beds, and provided for an enlarged Physiotherapy Department, an enlarged Emergency/Ambulatory Care Department, a new main entrance, plus improved office and supply accommodation. Plans also included new heating, ventilation and air conditioning throughout the new and existing building.

Whence the nomenclature “St. Francis Memorial?”
St. Francis of Assisi was chosen as the Patron Saint for the hospital because of his great love for all of God’s creatures; his characteristic gift of sympathy for the whole world especially for the poor, the sick, and the fallen; his courtesy and charity to all; his boundless sense of fellow-feeling; his sincerity and simplicity and his power of healing.

The word Memorial was included because the structure was to be a memento to all who had served their Country in two World Wars.

From the time of its inception, the hospital has tried to maintain the hopes contained in Premier Frost’s closing statement at the Official Opening, “May this be a great institution of usefulness and mercy to the residents of Barry’s Bay and surrounding Community.”